I was thinking of bringing some competition to Teammode and host (separately from unofficial tournament crew) an unofficial experimental league system for top players. Please note that there will be no rewards for this event and it is being hosted for entertainment purposes. You can also view this event as experimental Elite Teams tournament. 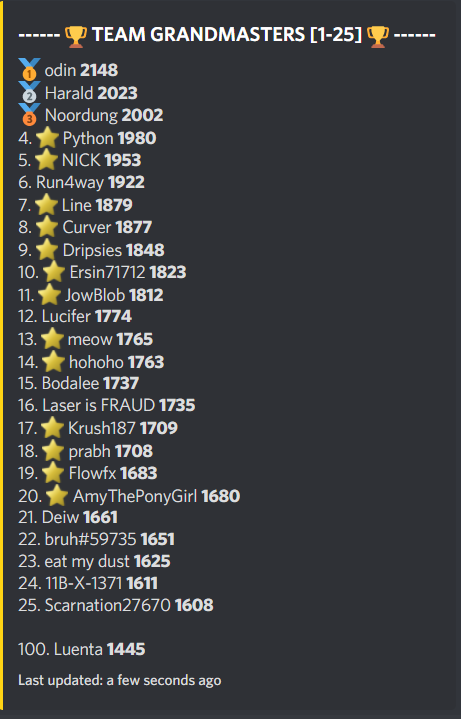 1st place would be odin with 2148, 2nd place would be Python with 1980, 3rd place NICK with 1953 and 4th Curver with 1877. Other people from the absolute top are either rank decayed or have multiple accounts in it.

Please note that at least 3 teams will need to have at least 1 VIP in their team so please take it into account (the more people with VIP membership, the better) - otherwise, we cannot host those games.

NB: (for team captains) Keep in mind that there are no other restrictions for picking your teammates, they only need to agree to join your team or cannot be picked by other team before.

All games will be recorded and uploaded to YouTube. After the videos are public, people can watch those high-skilled games from there.

I hope that this small event can bring some competition & joy in your summer evenings/nights!

We have finally gone through captain selection and we also drafted players into teams.

You can find from the following image, how we selected team captains and how the teams are going to be:

If you still have not contacted your team’s captain and you are in their team, make sure you do it as soon as possible so we can start with the games very soon and held them smoothly!

Also, special thanks to @Gremlin for helping me out with the design!

New rule: Team Captains can replace some of the bench players with some other players (for example if bench players do not want to play or cannot) until they play their first game. After the team has played first game, no more changes can be made in team’s roster.