I’ll give you all a quick rundown of how the new game mode will work as well as a release date (hint: it’s sooner than you might think). 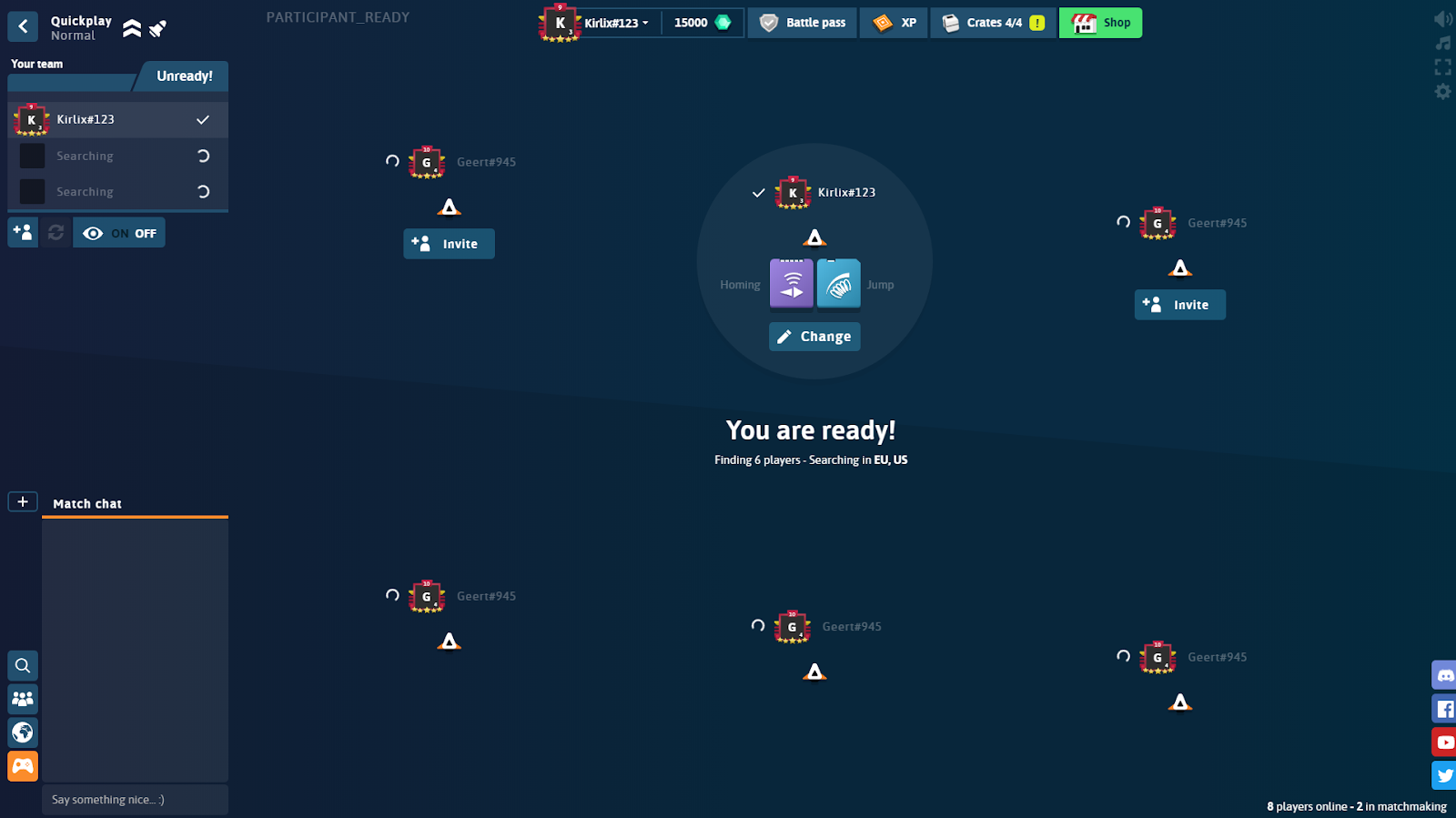 Initially, we wanted to just tweak the current gameplay, add the new matchmaking and release. As soon as we started testing amongst ourselves, we realized that keeping the same point system and overall goal as we now have in FFA was not working very well when playing as a team. We had to get creative.

Many brainstorms and iterations later we came up with the idea of Red Team vs. Blue Team each team with their respective crystal core.

Sounds vague so let me elaborate: Each team has a crystal core that the enemy team has to destroy to win. To destroy the enemy core you need to go with your ship over the drop area surrounding the core. When you reach that area, the points you have will automatically fly from your ship and attack the core.
If everyone on the enemy team disconnects at the beginning of the round, your team will have 10 seconds to drop off their points before the round ends.

Both cores start with 750 points and the match will last until one of the core reaches 0 points and explodes.

You win points by:

The Teams game mode will have a separate rank. You will be able to see both your FFA rank and the new Teams rank in your user profile.

And now to answer that burning question that everyone is probably asking themselves by now: The new update will go live on the 27th of August 2019. (TODAY

As with most big updates we put live please be aware there might be bugs that have escaped our notice during testing. Feel free to report any bug you might come across as the programmers will be keeping their eyes out for these reports! Thank you!

Last but not least, any feedback you might have will be greatly appreciated as we are looking forward to seeing what you all think of the new game mode.

The only downside I see from this, is that you won’t be able to use your colors. Which makes them kinda useless. Would be cool if you could put them in. Doing something like a hot vs cool instead of red vs blue might work. Then you would have to split the colors in cool and hot once just like in cf2!

If you have a skin selected you will play with that skin.

Oh nice, didn’t quite get that from your trailer! Well that solves that

Forgot to mention it

so good thing you pointed it out!

HOLY MUVVA OF GOD ITS HERE! THANK YOU JESUS FOR THIS DAY!

Best team in the world?

No, best team in the universe!!!

Either split skins into hot and cold colors, or make teams strictly one color. Otherwise it’s quiet hard to recognize your mates (especially for new players!). The slightly colored score is not enough.

Please give me both a team and an FFA quickplay

The term noob is not intended to be disrespectful at all. We all were once, and still are compared to better players.

I find this new game mode to be kind of awesome, but. I am very much looking forward to having the choice between this and ffa.

In rocket league mode I also find it would be useful if the chat was for team only. not much strategy in telling everyone what you teams plan is

I understand what you’re saying, however, we want to first test the Teams gamemode. If we had both FFA and Teams in quick play it would split the playerbase and we don’t yet have enough players to afford that.
For now we’ll keep Teams in QP and FFA in Customs and we will continue to iterate over the teams update and fix some of the existing bugs.
There are some matchmaking tweaks coming up that will hopefully lessen some of the issues you mentioned with being matched with less experienced players.

I totally understand. As I say: The game mode is awesome… maybe I should try harder to stick with players I had fun with for multiple games, which was the intention behind persistent grouping after all.

btw. I jumped onto the enemy crystal and my points didn’t affect it… https://curvefever.pro/43/replay/qaTarFDGo (Round 7)

Oh @knoppiks reminded me to also mention: Replays are bugged and need some rework after this update. I think we plan on disabling them until we fix them since it’s not as big of a priority as other bugs.

@knoppiks Thank you! We appreciate all the reports and the help with spotting these pesky bugs

!
If you don’t land in the area and crash in the core mid-jump your points won’t damage it.

@Kranich Thank you for your feedback! We are currently working having hot vs cool instead of red vs blue to make it easier, like you said, to distinguish players in your team.

If you don’t land in the area and crash in the core mid-jump your points won’t damage it.

aah … so this is intended? meh

Hot vs Cold works great, good job! Now the most urgent thing which I think needs to be done is assigning every skin into Cold or Hot, as it’s very hard to make sense sometimes if e.g. you have a Robot in your Hot team and a Starfish in the Cold team. Ofc there is some small % of skins when it needs to be your arbitrary decision if you assign it to Cold or Hot if a skin is logically speaking neither, but that’s fine: whichever team you decide to assign such a problematic skin to, it will not be misleading. While for the ‘obvious’ skins, they will get their natural teams so also won’t be misleading.

Are there any stats available as to what % of points the powers steal now? In the lobby you can see old values when clicking on the modules, but clearly the real values are now way higher than those officially shown.

Is there still a way to play FFA? Me and my friends like to FFA against each other and we can’t figure out how to anymore

Create a custom match and invite your friends or tell your friends the name of the match so they can search for it in the lobby.
Your friends can also join you through the friend list of course.